What is a Solar Thermal System?

"Changing the Way the World Makes and Uses Energy" SM

"The Future of Energy is Net Zero Energy!" sm

* Zero up-front cost for most homeowners and businesses in California

* YOU OWN the Net Zero Energy System sm from Day 1, not some other company.

* This is NOT a "Solar Lease" Scheme or a "Power Purchase Agreement."

* YOU own  ALL of the benefits of YOUR Net Zero Energy System sm from Day 1, including;

"Changing the Way the World Makes and Uses Energy" SM

What is "Net Zero Energy?"

Net Zero Energy - when applied to a home or commercial building, simply means that they generate as much power and energy as they consume, when measured on an annual basis.

The U.S. Army now has a Net Zero Energy initiative to help reduce/eliminate America's use of foreign oil  - particularly oil from muslim/middle-east countries - which saves the lives of our brave soldiers in the military.


What does a Net Zero Energy home or building look like?

Net Zero Energy homes and commercial buildings can look like any other residential home, hospital, school or commercial office building, they do NOT have to be ugly or modern in appearance to be Net Zero Energy!

And, your present home or commercial building can be updated to Net Zero Energy. 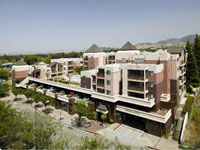 Net Zero Energy Buildings Are Coming - What About The Buildings Already Standing?

What is a Net Zero Energy Building sm

A Net Zero Energy Building sm produces as much energy as it uses over the course of a year.

First of all, understand that there is no such thing as a "zero energy building!" EVERY building uses energy, or you may as well be in a cave!

The important considerations are,

1.  How efficient is the building?

2.  How much energy does the building use, and how efficiently is it used?

4.  What are the utility company's prices for the excess power generated and sent to the grid?

5.  How difficult is it to interconnect the renewable energy system of the building with the utility company's powerlines/electric grid?

At the heart of a Net Zero Energy Building sm is the idea that any building can meet its energy requirements from low-cost, locally available, nonpolluting, renewable sources, like Solar Trigenerationsm Energy Systems. Solar Trigenerationsm Energy Systems are the idea whose time has come, to make Net Zero Energy Building sm commonplace.

Solar Trigenerationsm Energy Systems Provide All of the Cooling, Heating & Power, for Any Size Building, with only the Energy of the Sun. Solar Trigenerationsm Energy Systems Provide Simultaneous  Cooling, Heating & Power whether it is 12 Noon, or 12 Midnight,  and WITHOUT having to rely on the electric grid!

The Department of Energy developed the Commercial Building Initiative (CBI) and is pursuing the goal of marketable Net Zero Energy Building through research and partnerships.

The DOE's CBI has developed tools and resources to help the commercial buildings industry improve energy efficiency at various levels of energy savings.

What is a "Solar Cogeneration" (or Solar CHP) energy System?

1.  Solar Electric Power System with a

for the best of both worlds.

What is a "Solar Trigeneration" energy System?

1.  Solar Electric Power System  with a

and takes a Solar Cogeneration energy system one further step by adding and integrating either;

3.  Absorption Chillers or Adsorption Chillers, which receives some of the hot water from the Solar Water Heating System and provides the energy needed to make 38 degree chilled water for air-conditioning.

We install our Solar Trigenerationsm Energy Systems, for qualified commercial businesses, as well as  cities, schools and government facilities with our Zero Up-front Cost program.

For some customers - based on their present location, utility company and electric rate - we are able to reduce their electric rate by 10%. Even more for other customers.  Solar Trigenerationsm Energy System!

The founder of the Renewable Energy Institute (REI) was first involved in Net Zero Energy buildings and Solar Trigeneration sm energy system in 2001 - 2002.  This started with family-owned real estate developments in Northern and Southern California.  This interest was accelerated when REI's founder was introduced to the President of a solar company in Los Angeles and their client, the Audubon Nature Center at Deb's Park (Los Angeles) that was planning to build a new 5,000 sf office and conference center. Except, the new building for the Audubon Nature Center was about 1/2 mile from the end of the power lines and a very costly extension of the power lines to their new facility forced them to consider a solar solution. When the Audubon Nature Center's new 5,000 sf office and conference center was completed in 2003, the facility not only featured the Solar Trigeneration sm energy system - they were awarded one of the first Platinum LEED Awards by the USGBC - and the powerlines were still 1/2 mile away! To this day, 100% of the power and energy for the Audubon Nature Center's building is supplied by the Solar Trigeneration sm energy system - whether at 12 noon, or 12 midnite.  (The Audubon's facility also includes a battery energy storage system for back-up power generated by the Rooftop PV panels as well as a thermal energy storage system that stores the excess hot water generated by the evacuated tube collectors).

These early projects led to more client inquiries and engagements with real estate developers, architects and building owners in Southern California, Louisiana and Texas and the advent of a growing Net Zero Energy industry along with Solar Cogeneration sm  & Solar Trigeneration sm energy systems. This culminated in a family-owned 200 (Net Zero Energy) home real estate development in Desert Hot Springs which has been approved but not yet constructed.

In 2006, after Hurricane Kattrina devastated New Orleans, the REI was formed and several of the REI's board members and a Professor from the University of Texas School of Architecture formed a design team to enter the Brad Pitt/Global Green Rebuild New Orleans Competition.  Our entry also focused on sustainable building solutions and materials as well as the Net Zero Energy concepts, incorporating once again, a Solar Trigeneration sm energy system.

Today, the REI "Flagship" has chartered the Renewable Energy Institute in Florida, with discussions to open REI state chapters in Arizona, California, Hawaii, Minnesota and Oregon.

Net Zero Energy Buildings Are Coming - What About The Buildings Already Standing?

Ends the worst economic depression of all time

“spending hundreds and hundreds and hundreds of billions of dollars every year for oil, much of it from the Middle East, is just about the single stupidest thing that modern society could possibly do. It’s very difficult to think of anything more idiotic than that.”
~ R. James Woolsey, Jr., former Director of the CIA


According to R. James Woolsey, for Director of the Central Intelligence Agency, “The basic insight is to realize that global warming, the geopolitics of oil, and warfare in the Persian Gulf are not separate problems — they are aspects of a single problem, the West’s dependence on oil."

"Changing the Way the World Makes and Uses Energy"